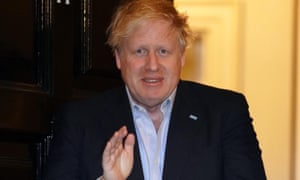 The British Prime Minister is critically ill. His survival is now a matter of pure chance. So we and the government lie to protect ourselves – even when truth is more useful to us.

He’s a Fighter (and other lies)

Anyone who has known a relative or friend get desperately and critically sick has told the lie “They’re a Fighter” and thus “If anyone can get through this, they can”. We tell ourselves they are strong, and that they’ve been through worse, and so on.

We use these comforting lies because of our desire for the fallacy of control. Human beings are terrible at accepting that our lot in life – and especially our survival – is a fluke. Instead we kid ourselves that the person we love is somehow magically different to other people – better than other people – because we love them and we want hope.

We also like a moralistic concept of the world that somehow rewards virtues under our control – even though that’s obviously silly in real life. Hence, after the laughably flimsy explanation for the Prime Minister going into hospital for “routine tests” we are now onto the even more transparent lie that “he’s a fighter”.

The truth is very different. During your erstwhile writer’s time sick on a Covid ward I saw the “fight” up close. There was an elderly West Indian man opposite me who spent 24 hours “fighting”, and by fighting I mean laying on a bed breathing.

He had an oxygen mask to try to squeeze enough oxygen into his veins through his struggling lungs. He was particularly hard hit whenever he had to take it off to spit out the blood he was coughing up.

The guy did not sleep (and neither did I). For the whole time he was across the ward from me he was exhausted and desperate and in awful pain despite the drugs. Yet, as I was happily set for discharge, he was just about getting a small victory. He was able to last long enough without the mask to eat some lunch.

That’s what the fight is. It’s no fight at all and it’s mere chance if you win it because you don’t actually fight it.

The Prime Minister lost that fight. There’s no morality to that, no spirit of survival, no bravery – just luck. You get lucky or you get unlikely and Johnson got unlucky like thousands of others.

Unlike the West Indian chap, Johnson’s body lost the fight for oxygen. At this point his body had done all it could and the virus was just too much for him.

There’s no shame in that. There’s no shame in him turning out not to be the “fighter” we lie to ourselves about people being when we hope they get lucky. Because it’s not real. Like all of us, his body is just a bunch of cells. Some other cells attacked it and his cells couldn’t survive the consequences.

No immorality, no missing spirit of survival, no cowardice – just bad luck.

Of course, despite losing “the fight”, Boris Johnson is reportedly still alive. The reason for this is because when our bodies can’t survive, other people help us.

In the UK we call this the NHS. We all contribute (except some rich people who avoid tax) and so we all fight for each other.

When Johnson’s body lost, just like anyone else’s body that lost the covid fight, it was taken to ICU and put on a machine to do the fighting for it. This machine is the real fighter at this stage. It fights to keep a body alive long enough for the disease to be killed off (at least to sufficient extent that the body can resume surviving by itself).

This is no perfect system. Estimates on Covid suggest about a 50-50 chance of the machines being able to do enough that someone will recover rather than die. But 50-50 is a real chance compared to the “fighter” myth that thousands like the Prime Minister have fallen short of living up to.

This fallacy really matters. For a start, imagine the worst – Boris Johnson dies this week. What have our lies said about that? That it turns out he’s not strong and he’s not a fighter? Thus he was weak and gave in? This is one problem with things like the fighter myth. When then person dies it can feel like it was their fault or weakness that did it. That hurts those who cared about them.

Boris Johnson is not a smoker. That is a real reason his survival chances might be higher. He reportedly lost some weight recently too – another cause for optimism. Emphasise such truths and you not only don’t need fighter fallacy, you actually send a useful public message about how to survive this pandemic.

And then there’s the biggest missed truth. Boris is in the UK, so he’s got the NHS looking out for him – just like all of us. Those of us who pay our taxes because we care about eachother have given him (and others) a far greater chance of survival.

That message matters. Because rebuilding the NHS would save far more lives than fighter myths.